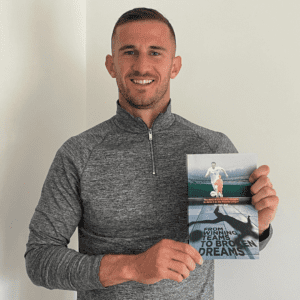 What is it like to give your all but see the dream of becoming a topflight footballer slip away before your eyes?

Six friends’ struggle to become Premier League footballers is the theme of a moving new memoir ‘From Winning Teams to Broken Dreams’, written by former England under 20 international, Dominic Ball.

Dominic is donating all author royalties of his first ever book to Sarcoma UK in memory of his friend Spencer McCall, one of the six boys featured who died of Ewing’s Sarcoma last year at the age of just 26.

Plucked from junior clubs as primary school-age children by England’s biggest football academies, the book reveals the inside-out experiences of talented and determined youngsters who strain every sinew to reach the world’s most competitive league.

An EFL Championship level footballer currently with Queens Park Rangers, Ball shines a light on the trials and tribulations experienced by many young players including the strain of playing under pressure, lonely loan moves and cruel, untimely injuries.

Ball, who signed his first professional contract at Tottenham Hotspur and has played for Rotherham United, Cambridge United, Rangers, Peterborough United and Aberdeen, said that the book had been five years in the making and poses serious questions about football youth development in England.

‘The book is being published to raise money for Sarcoma UK, a charity that funds research into the rare form of bone cancer, Ewing’s sarcoma, which sadly took the life of Spencer McCall, one of my best mates and one of the lads featured’ says Ball.

The book is available to buy now on Amazon and other bookshops.