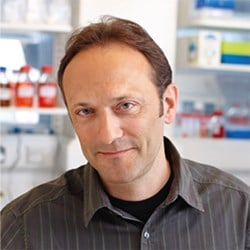 Professor Meier and his colleagues at the Institute of Cancer Research aim to get us one step closer to new treatments for UPS – by programming the immune system to attack cancer cells as if they were a virus.

Chemotherapy is a common type of cancer treatment, which works by damaging rapidly growing cancer cells. When this damage is too severe and the cell can’t repair itself, it activates a self-destruct programme, causing its own death. This process is called apoptosis. It is a routine process carried out by the body to get rid of cells which are damaged beyond repair. However, a key problem in treating sarcoma patients is that cancer cells frequently grow resistant to apoptosis, and therefore do not die, causing the treatment to fail.

How will this project tackle this challenge?

Prof Meier and his colleagues have now have discovered a new way to kill cancer cells which have become resistant to apoptosis. This involves a different kind of cell death, where the cells burst open and release their contents. Unlike apoptosis, this method is messy, and can wake up a patient’s immune system to attack and destroy the sarcoma. Through this research, the team will be able, for the first time, to flag-up cancer cells to a patient’s own immune system so that it attacks them as if it was a virus.

This project will take this idea to the next level, testing if the theory works in practice. A PhD student will explore this method using techniques in the laboratory and test their findings using samples of undifferentiated pleomorphic sarcoma.

What this means for people affected by sarcoma

Undifferentiated pleomorphic sarcoma is the most common subtype of soft tissue sarcoma, with very few new treatments for the last 30 years. Long term, the team hope their research will be applicable to all sarcoma patients in the future, by encouraging our immune system to respond better to the cancer, paving the way to better and kinder treatments.

For the first time, the team will be able to flag-up cancer cells to a patient’s own immune system so that it attacks them as if it was a virus.

We would not have been able to fund such vital research without your generous donations. Help us improve outcomes for people affected by sarcoma by supporting our research programme.

We fund world-class science to ultimately make a difference to people’s lives.

We receive no government funding, so we rely on your generosity and support.