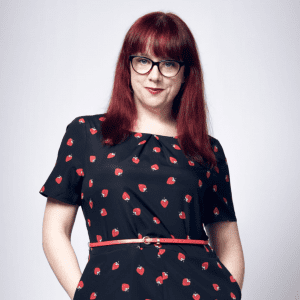 We are excited to confirm that we are working with a new celebrity ambassador for Sarcoma UK, comedian Angela Barnes.

Angela is perhaps best known for appearing on popular British television shows such as ‘Mock the Week’, ‘Richard Osman’s House of Games’ and ‘The News Quiz’. She also currently co-hosts the, as she describes, “less-than-serious history podcast” ‘We Are History’, with writer John O’Farrell.

‘I am really honoured to be asked to be an ambassador for Sarcoma UK as their mission means a lot to me’ says Angela. ‘I had never heard of sarcoma until my close friend and fellow stand up comedian Phil Jerrod was diagnosed and sadly passed away in September 2021. I am passionate about raising awareness of sarcoma, raising funds for research, and helping to make a positive difference to the sarcoma community’.

We are thrilled to be working with Angela on some exciting upcoming projects. Watch this space!

A list of challenges including running, cycling, walking, adrenaline and virtual challenges.

These cutting-edge projects cover a wide range of research fields.