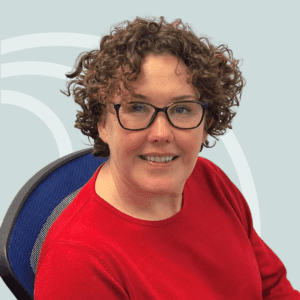 Lorna Kennedy has recently started as Sarcoma UK’s Patient Involvement Co-ordinator, a role that focuses on ensuring all of the charity’s work has input from patients and supporters. In this article, Lorna tells us of some of her experiences that have led her to taking up this important role – including a fortunate bite from a horse…

2018 had been a tough year. I had started a new job that May, including a promotion, and I was full of optimism and enthusiasm for a new venture. However, not long into the role, a call early one morning from my mother changed my best-laid plans. My strong, independent mother, who lived five hours away, rang me in trouble. She reported pain, breathlessness and weakness and needed my help. That was the Thursday, and Thursdays meant turning up to work and not skiving off to rescue mothers. She taught me well and leaving work early wasn’t something you did. “I’ll be there Saturday,” I said.

She died 3 months later, lung cancer as it turned out and I still regret not dropping the new job earlier.

The new job didn’t work out the way I had planned and by the December of 2018 I had made the decision to leave. Looking back, the new job came at the wrong time, but it was around this time my horse, Fiddler, nipped me on the right forearm, and I became aware of an innocuous lump on the same arm. It was about 4cm big, not painful, but it didn’t seem to go down – in fact, it looked like it was getting bigger and fast! Whether you believe me or not, I like to think that Fiddler somehow alerted me to its presence.

I should let you in on the fact that I’m a nurse and previously a Specialist Nurse in Upper GI cancers, so I knew “the lump” could be a possible cancer. I went to my GP to explain I needed an urgent ultrasound referral for a possible sarcoma. I was lucky that the GP took my concerns seriously and didn’t say my nursing background had made me neurotic, and she referred me on an urgent referral pathway for a possible cancer.

Nearly three years following treatment, here I am: excision, reconstruction with skin taken from my thigh, and six weeks of radiotherapy (or the world’s most expensive sunbed, as I like to call it).

‘I was very lucky, if you can call having cancer lucky.’

I’ve still got my arm, which functions perfectly adequately, although I probably won’t play the piano (I can hear my music teacher rejoicing). The arm doesn’t look very pretty, scarred and misshapen, but I’m still here and I’m grateful. My treatment was at a specialist sarcoma center, and I was surrounded by friends and extremely competent colleagues (big up to oncology at the Royal Cornwall NHS Trust and the University Hospitals Plymouth NHS Trust) that I had worked with in my previous working life.

Three years later, my cancer journey has led me to a new role as the Patient Involvement Coordinator at Sarcoma UK, which I started at the beginning of February. My role will continue to develop patient involvement in all aspects of the organisation’s work. Meaningful patient involvement will make us more effective as a charity, and it’s my hope that providing opportunities for all people affected by sarcoma will give satisfaction to our supporters, who will know that their involvement will ensure that everything we do has patients at its heart.

I will be developing this new role over the coming months, but if this has caught your eye, watch this space for updates and how to register your interest.