Our latest two events were held in the Westminster and Holyrood parliaments in March 2022, at which MPs and MSPs from across the UK and Scotland discussed the importance of early diagnosis with Sarcoma UK. We are very grateful to the events’ co-sponsors, Marion Fellows MP, Mark Tami MP, Alex Rowley MSP and Finlay Carson MSP. 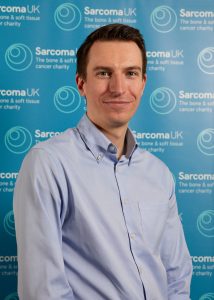 Both events had excellent turnouts, which we owe a huge thank you to our supporters for contacting their MPs and MSPs to request their attendance and expressing how important sarcoma is to them. This resulted in 54 MPs attending the Westminster event and 29 MSPs attending the event in Holyrood. Every single one of them now has a deeper understanding of sarcoma and the need for earlier diagnosis.

Gaynor Anders, who was diagnosed with synovial sarcoma in 2020, attended the London event and spoke to politicians about her experience. She is all too aware of the importance of early diagnosis after five years of trying to get her concerns taken seriously, despite repeated scans. Alasdair Punton joined the team in Scotland and shared his story with MSPs in Holyrood. His wife Becky, aged 28, died six months after her diagnosis with Ewing’s sarcoma in 2019. Like many sarcoma patients, Becky experienced difficulties in obtaining a diagnosis.

Staff from Sarcoma UK spoke to the MPs and MSPs to tell them about sarcoma and explain that early diagnosis is one of our main priorities at Sarcoma UK. We explained that our Early Diagnosis Expert Steering Group of healthcare professionals, patients, and carers (link to steering group page), have advised that focusing on the following four areas will improve the speed at which sarcomas are diagnosed:

Raising awareness is one part of a wider set of projects at Sarcoma UK on early diagnosis.

We had constructive conversations with many representatives, such as MP Dave Doogan on this important topic – a major driver of improving survival of sarcoma. The events were a key platform for generating wider social media awareness. Since then, we have seen much support via social media and MPs raising early diagnosis of sarcoma through parliamentary questions. Monica Lennon, Jackie Baillie and Joe Fitzpatrick have all received replies from Humza Yousef (Cabinet Secretary for Health and Social Care in Scotland) to their asks on what the government are doing to improve the speed at which sarcoma is diagnosed. Dr Rupa Huq submitted a parliamentary question while Dave Doogan and Lee Anderson MP promoted early diagnosis through their local press.

“It was great to see so many politicians from across the UK and Scotland acknowledge the importance of improving sarcoma diagnosis, and putting early diagnosis on the agenda.”

“It was great to see so many politicians from across the UK and Scotland acknowledge the importance of improving sarcoma diagnosis, and putting early diagnosis on the agenda.”

Where everyone affected by sarcoma cancer has the treatment, care and support they need.

Thanks to you, we have come a long way in a short time.

Policy and Public Affairs – how we’ve influenced and engaged

The last decade has seen a transformation in policy and public affairs work for Sarcoma UK.