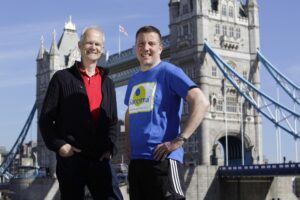 A truly inspirational man who gave hope and strength to others.

Dave was diagnosed with a fibrosarcoma in his abdominal wall 11 years ago, when he was 38.

He joined Sarcoma UK’s Board of Trustees in 2014 and his commitment and dedication to the charity has been enormous. Dave was a champion for people with sarcoma and for the charity. He made an enormous contribution to Sarcoma UK and also to the wider sarcoma community. His positivity was legendary.

His wife, Anjula, a pillar of strength, has been by his side throughout his journey and remains very close to the charity. His daughters,  family and friends have been the inspiration for Dave’s strength and determination during the past 10 years. Dave was realistic about the challenges he was facing but always remained positive.  His lifelong friend of 40 years, Neill, ran his first London Marathon (having never even run for a bus previously!) to show his support for Dave.

As staff and trustees at Sarcoma UK, we have lost a much loved friend and colleague. We will celebrate Dave’s life and achievements through our continued determination to improve the landscape for everyone affected by sarcoma.

He was, and always will be, our champion.